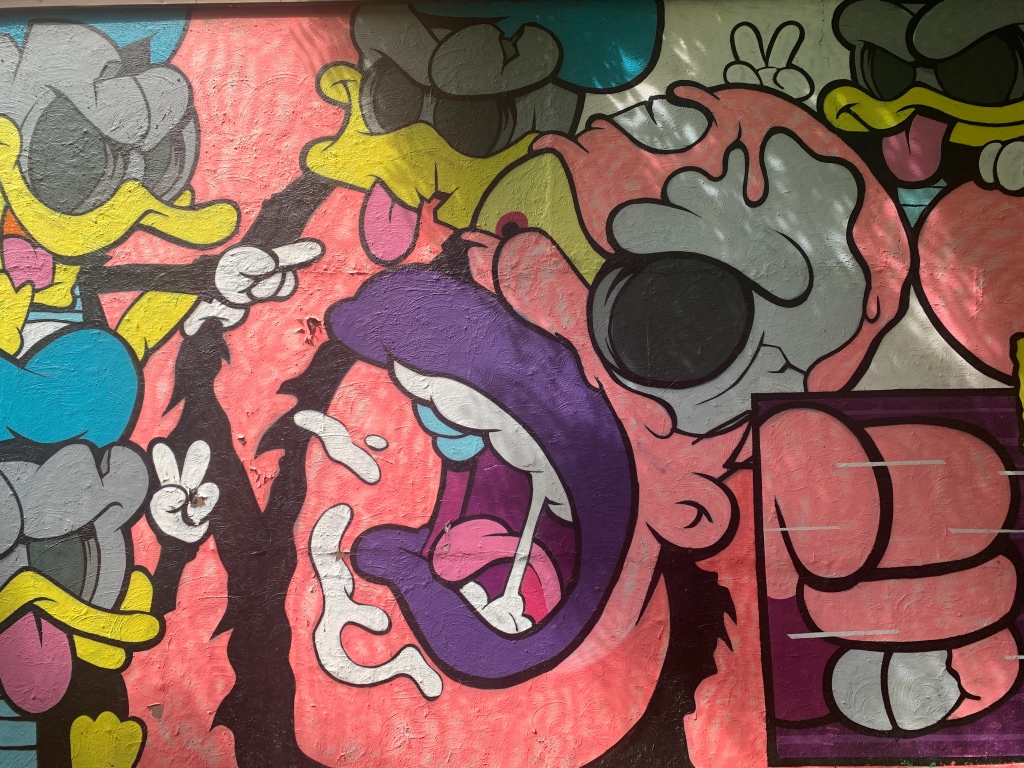 Here comes the asshole again. His sphincter is puckered just ready to blow. His hemorrhoids look painful, swollen, like probably he can feel his heartbeat in them. And some of us roll our eyes because here we go again.

The new guy, Ian, asks, “Is that a walking asshole?”

We smirk at each other because the new guy has no idea. The asshole is a regular. “Yep,” we say, “That’s a real asshole.”

The asshole approaches Davi who is trying to stock eggs. We all cringe in sympathy. Except for Ian, we’ve all had our interactions with the asshole.

“Excuse me,” the asshole splutters, drops of pure shit dribbling out of him and down his taint, collecting on the floor. “Last week you had a cookie on sale I wanted to try but now you’ve moved it.”

Davi, bless her bless her, she doesn’t crack under the asshole’s shit dribble at all. “Hm,” she says, “Sorry, Sir, I usually work more in dairy. Can you describe the cookies?”

“You had them right here!” the asshole insists, spraying some of that shit on the front of Davi’s uniform. And, bless her bless her, she still doesn’t react. The asshole is pointing toward an endcap which has housed a pepper jelly display for the last three weeks. “They were in a yellow box!” The asshole is farting, now, too, releasing little puffs of shit and smell into the air around dairy.

Davi, a pro, bless her bless her, moves smoothly around the farting, shitting asshole, out from under his cloud. “I’ll just go get a manager,” she says nicely, “they should be able to help you out.”

In the back room, Davi takes a moment to throw up into the mop sink. She’s wearing a t-shirt under her uniform, thank goodness, and she takes the uniform off and trashes it. “Mikey,” she calls out to the manager running the floor. “Mikey, the asshole is looking for a kind of cookie I know we don’t carry. I’m taking a break.” She leaves through the back door, out past the dumpsters, shaking an American Spirit out of the pack in her pocket as she walks.

Mikey is the assistant manager who is the nicest to customers and the meanest to us. But even he has to take a few deep breaths and put on an apron and gloves before heading into the line of the asshole’s fire.

“Why do they let him shop here?” Ian asks. “I mean, if he just shits on everyone.”

“This guy Ben who used to work here wrote to corporate about the asshole,” we say. “He suggested we just, like, do the asshole’s shopping for him or something. They fired him. They said it was because denying anyone service, even a literal asshole who literally shits on everyone, was totally against company values.”

“This isn’t right,” Ian says. “This shouldn’t be normal.”

We shrug. “If you don’t want to take shit then, like, be born wealthy.”

Out on the floor, the asshole has let loose a trail of diarrhea from the egg case to the cookie aisle to the customer service desk. He is filing a complaint. Again. Because we are lying to him about these cookies that we don’t sell because, Mikey tries to gently explain, that particular cookie is a store brand sold by Whole Foods. Other customers are fascinated and disgusted by the asshole’s behavior. One old woman says to her cashier, “What an asshole!”

The asshole’s sphincter smacks wetly as he unleashes his tirade on Mikey. And we feel gleeful that today is a Mikey shift and that he is the one who has to put up with all this shit.

Davi sits in her car, smoking her cigarette, dreaming of some other sort of job, anything. And Ian mops up the spill, dreaming of  _____izing. And I clock out for lunch and imagine myself living in a tent in the forest with only my own shit to deal with.

Brooke Kolcow is tired but hanging in there. They are the Deputy Editor at Taco Bell Quarterly. You can read more of their work: linktr.ee/bkolcow Follow them on Twitter: @bkolcow