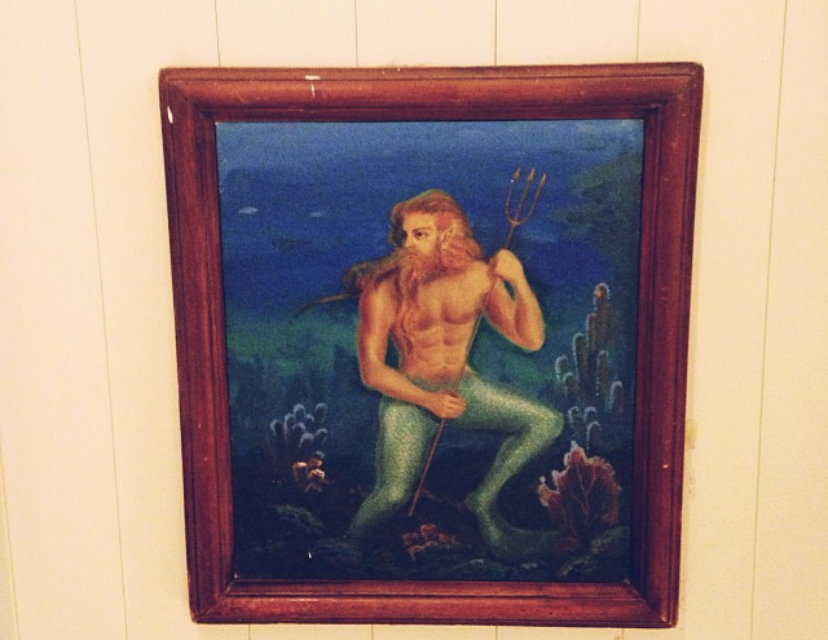 I sat on a rock by the shore and waited for the first fish to walk out of the sea, and when it did I stood on my own two feet, which may have been insensitive to the poor critter, whose own feet were in need of some improvement, and I took off my hat and introduced myself.

It opened and closed its coin-sized mouth, tasting the air, while I explained to it what we had all decided.

I, I told the fish, am going to drop-kick you back into the primordial ooze. And there you’ll stay and we’ll all be the better for it.

The fish tried to go around me and I stepped in front of it and said, don’t make me do this. You can just turn around and swim away. Swimming’s good enough for all the other fish, so why isn’t it good enough for you?

It nudged my foot to get me to move but I would never, not after what we had all decided. The others trusted me to drop-kick this fish, and I would, if it was the last thing I did, and it would be.

But I wasn’t ready to, not yet. The fish was me and I thought it might hurt to be kicked, so I tried what we called negative psychological reinforcement.

You stupid fucking fish, I said to the metallic thing, no bigger than a loaf of bread. You bastard. Did you know that you invent every bad thing? You invent war and cancer and student loan debt. One time, I ate weird salmon on a date and then she stayed over and I had to silently shit my brains out for like, six hours. That’s on you.

You made a world that ended. Prick.

The fish would not be able to speak for some eons, but I saw its response in its marble-round eyes, and I won’t lie to you: It stung.

I didn’t want to kill the fish, because then the other fish, who were waiting eagerly for this first fish’s dispatch from the surface, and who if it didn’t die or become otherwise emotionally bereft, they would follow, they would see this dead fish floating and think of it as a martyr, and then where would we be? I didn’t want to accidentally invent religion.

I changed tactics. I crouched down, got on the fish’s level, the way my first grade teacher had when she explained to me that crayons are not food.

Two things, I said to the fish. One, you can’t eat crayons. Two, you have to go back. You won’t find anything worth finding up here, buddy. You’ll lay a bunch of eggs and then the hatchlings will look at you and say, in their silent language, what were you thinking? We don’t belong here.

That is what we had decided, the hatchlings of the hatchlings a billion times over: That we don’t belong here. And that is why I had been sent back, to correct this one fish’s mistake.

The fish blinked, but it did not turn around, so I took it in my hands, and feeling my fingers it thought, I need to get me some of those, and then I placed it back in the water, and to its regret it immediately felt better. Already, I could feel the unraveling of history and science and that one bad date.

That same elementary school teacher could carve the meat of an apple into one long spiral. It is that that the fish and I were doing to time.

I felt a bit lightheaded, so I sat on the rock where I’d first sat, and waited to unbecome, and I closed my eyes, because I did not want to see what I lost first, not my skin or my heart or my toenails, and while I waited the fish who I had put back into the sea walked out again, and into the long grasses, and I could not find it again.

This was the ninety-sixth time I had tried to dropkick the fish who came from the sea. The others would send me back again, to try again, but before they did I walked up to my chest in the water, which all of us had tried, only to discover that a fish could walk out but not walk back in, and that is why it had taken ninety-six times and would take more.

Mary Colussi is a writer based in New York City. She recently graduated with a degree in dramatic writing from NYU Tisch, where she learned to write scripts for the screen, stage, and the arguments she wins in her mind. Her work has appeared in Points in Case, Little Old Lady Comedy, Sally Mag, and others. You can follow her on Twitter @MaryColussi.