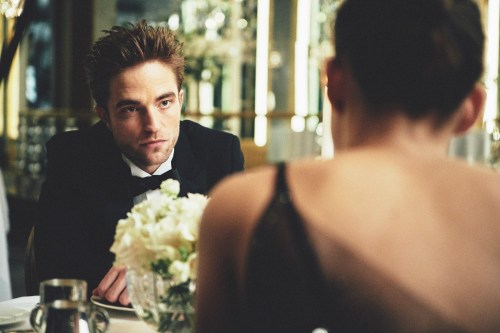 Thank you so much for your submission: “Dior Homme – the new fragrance: I’m your man”, starring Robert Pattinson and “random model woman”, in what looked to us to be an MDMA fever dream.

Whilst we enjoyed shots of Pattinson smiling – we weren’t quite sure what to make of the blatant La La Land rip off of him lifting “random model woman” onto a bench. Nor were we entirely convinced by the weirdly “white knight” sequence where Pattinson makes a move to push her behind him at the approach of three men from the shadows. Were these three men a definite threat? Were we supposed to be frightened of these antagonists? If so, we would suggest adding more depth and characterization to these shadowy villains, and really make us care about both your protagonists, and any danger they might be in. At present the viewer doesn’t really give a shit, and is kind of irritated by the propagation of an outmoded and vaguely sexist idea that a man must protect his woman. Yawn. Seen it before.

The most confusing part follows a section of dancing, vaguely reminiscent of 3am on the dance floor, coming to hear your friend declare they love you whilst the beat ricochets in your ribcage. We truly admired your attempt at juxtaposing this against Leonard Cohen’s rasping drawl. In the following shots it looks like Pattinson is gurning his tits off, chewing a particularly tough piece of gristle or (and this is my personal favorite take) a particularly garlicky escargot. I don’t know, it just gives me an essence of garlic – which is probably not what you were aiming for in creating a perfume ad.

Furthermore – I’m not sure who this ad is aimed at. Am I supposed to want to fuck him, or be him; or both, or neither?

Either way I’m left with the impression that Dior Homme would smell like garlic, the t-shirt you wore the rave, and a slight musk of “sexy man”. Slightly reminiscent of the snog you had with your last one night stand after finishing the kebab he’d added liberal amounts of garlic mayo to.

Would I buy this for me? No.

Would I buy this for a potential BF? No.

Would I shag Robert Pattinson in this ad? Yes – but that’s beside the point.

Thank you so much again for thinking (or perhaps more accurately not thinking) of me, and for submitting this work for consideration.

May I wish you every success in placing it elsewhere?

Best of luck, and kindest regards,

Lucy Wallis is a writer from London who can currently be found in Paris leaving croissant crumbs in between the pages of books. Her first full-length work is due to be published by Repeater Books in 2021. She tweets @thelucylist and blogs on www.abyssdiving.wordpress.com.